While going to the local beaches in Arilje every single member of our workcamp noticed an interesting castle placed on the one of the hills. First thought was that supposingly it is a castle of former rulers of the region, middle aged monument with its own rich history. Then it showed that it is a private house of some excentric painter itself. Exactly, we didn’t know what to expect there. The presence of Ljubovic Jovanovic let us to wait uncalmly for mysterious and individual style of pictures. We weren’t mistaken it showed after a moment. With entrancing the castle we catched the impression that the pictures are in high connection with the past. Especially with the Serbian’s province style of living. Moreover, it became vidal that in the eyes of Jovanovic  it is still a strong desire to tell the history of Serbians, their environment, nature, work, customs, because it is unique and attractive. This attractiveness can be measured by the fact this kind of traditional art can be exhibited in galleries just for the fact it is authentic. The modern art is overloaded with amateurs works and copied tendancies. Jovanovic is possibly the one who is totally aware. That is why his way t express Serbian soul is to promote Arilje as no foreign artist could find it as an obvious kind of self artistic expression. vidal attached to traditions is highly expected nowadays as it is in minority. 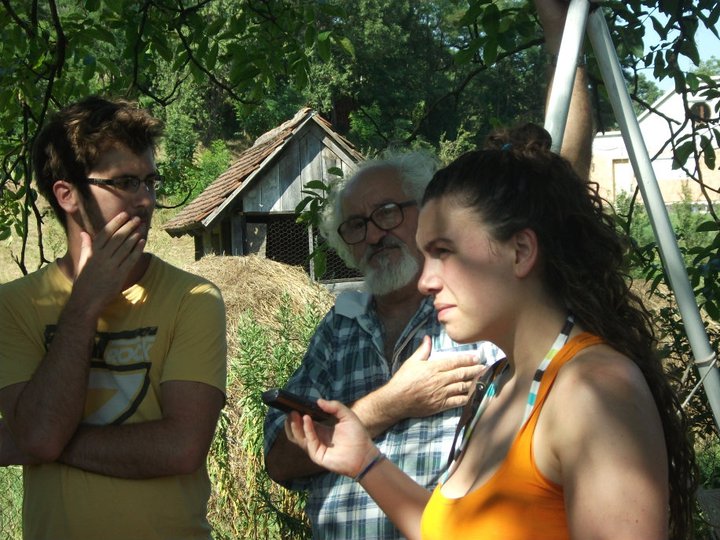 The walls are full of brigtful landscapes. Intensive colours used, wealth contrast speak for an artist themselves. The main motive of women like shaped trees with natural background is his main feature. Some could say these are the main elements of every souvenir picture in southern Europe tourist’s places. My reply is to meet an artist first as his his current style is a combination and consequence of former experiences and different personal artistics periods. I guess at this point his only desire ids to tell his own storyaccoring to childhood memories and landscapes memorized. Thus it is well done work which graps attention at once. Tradition strikes at first glimpse. The impression of unwillingness to copy anyone in another think to be told. It’s a pure essence of Arilje seen by someone from whom we can expect a great connaisance of the matter.

The pictures make me feel as I was back in times when fovism started to attract art critics at the beginning of former century. I can easily compare some pictures to those of Cezanne or even Degas. It is a blend of styles. The author mixes his experience of impressionism with emotions right from expressionism style in order to present Serbian history. By looking at overloaded walls it is enough to really tell which ones are of which period. At last, after all the influences seen there he turns at the folk motives at presenting Serbia it really does look like by a Serbian patriot.